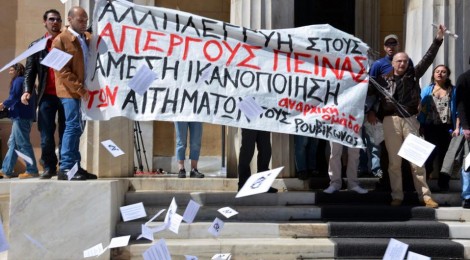 Today, after a call out for international solidarity, a group of 15-20 anarchists in Greece, in parallel with a continued stand off at the occupied Athens university building, occupations of a town hall and a Syriza office, and protests within the prisons, held a protest on the steps of the Parliament against repressive laws and to support imprisoned hunger striker. It is quite unusual for any protest to get on to the steps of the parliament, and the group were all detained:

Watch video of the protest: https://www.youtube.com/watch?v=Ayl16jTX_HQ

This is a significant struggle in Greece at the moment. Like the case with the hunger strike of Romanos back in December there is a hunger strike in the prisons and a struggle outside using various different means – occupations (Syriza office, and now the University of Athens), protests/riots, counter-information and interventions at radio stations, etc. The hunger strike of DAK (see below) has united various imprisoned anarchists and others around the demand to remove high security prisons (a recent creation of the previous government) and anti-terrorist laws.

Before today’s protest the Greek IWW sent out this solidarity message:

Industrial Workers of the World – Greece. International Call for Revolutionary Solidarity with the Political Prisoners on Hunger Strike

At the present moment, the imprisoned anarchists, members of DAK (Network of imprisoned social fighters), A. Stampoulos, A. Theofilou, G. Karagianidis, D. Politis, F. Charisis, A. Dalios, D. Mpourzoukos, G. Sarafoudis, G. Michailidis, the members of the “Revolutionary Struggle” N. Maziotis and K. Gournas, the member of “17th of November” D. Koufontinas, a number of Turkish political prisoners and the prisoners G. Sofianidis and M. S. Eltsibach, are on a hunger strike, fighting against the repressive legal state of exception which has been established by the Greek state since the beginning of 2000.

Starting on March 2nd, along with the comrades outside the prison walls, we commenced a struggle for the abolition of type C high security prisons, the abolition of “antiterrorist” law, the abolition of the “hoodlaw”, the radical change in the process of taking and identification of DNA samples, the release of the seriously sick member of 17N S. Ksiros.

The struggle for the fulfillment of these demands is a struggle against the core of the state of emergency. It is a struggle against the core of the new totalitarianism which has been enforced by the state of Greece, as well as by the rest of the states globally. Recognizing the fact that the nexus of dominance’s designs transcends the narrow geographic borders of national states, we call all Fellow Workers to support this fight and to act in solidarity on the 1st of April, sending a message of revolutionary unity.

VICTORY TO THE STRUGGLE OF THE HUNGER STRIKERS

IMMEDIATE FULFILLMENT OF ALL THE DEMANDS

FOR THE ABOLISH OF STATE AND CAPITALISM

The Industrial Workers of the World (IWW) in Greece support the demands of political detainees that went on hunger strike since 2nd of March. We call FW’s throught the world to express their solidarity to the hunger strikers on WEDNESDAY, APRIL 1st, 2015.

Tags: Greece, international, IWW, occupation, Prison, Solidarity, Syriza
← New publications from the AF for October 2014
What the Suffragettes Did For Us (hint: it was more than the vote) →