Browse: Home   /   Fascist Foot in the Door of Squats 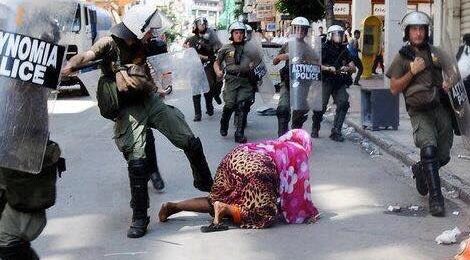 Fascist Foot in the Door of Squats

An article from an AFed member who spends much of their time in Greece supporting migrant families.

At 5am Monday morning, four squats in Exarchia, Athens were stormed by police wearing riot gear. Exarchia is a small area in central Athens which has been home to squats as well as a well known Anarchist community.

143 people, mainly women with children, were taken to police stations in buses and held there. After 6 hours they were given 500mls of water and a small bowl of pasta. The last time a squat was evicted like this, a woman miscarried her baby as a direct result of the stress. Up until now we haven’t heard of any issues like this but the stress on top of existing PTSD is horrendous.

Many of the migrants evicted have now been taken to closed camps. Not only have they had their freedom and safety taken away, but they wern’t given the time to collect even basic possessions. Children’s toys, essential items like baby formulae and medication have been left behind. The closed camps offer no guarantee there will even be places sterilise bottles. Illness has spread quickly in many of the Greek refugee camps due to cramped and unsanitary conditions, these are a potentially dangerous environment for babies, young children, and vulnerable adults.

This assault by the police is the action of the recently elected New Democracy government, while its leader Mitsoitakis is at G8 summit. The Stelios Petas, government spokesman referred to the operation as a vacuuming of the dust of the area.

This reference to human beings, fleeing from Syria, Afghanistan and the like, as less than human is the typical fascist use of dehumanising language. Golden Dawn in uniform! After the evictions were over, the police stood around, chatting and drinking coffee. When you take a person and train them in this way, they lose any connection to the things they do. People’s only belongings are on the streets. Mattresses and bedding, soft toys and books. All the stuff of life that homeless people manage to gather to create some way of living has been trashed.

The timing of this assault and eviction comes before the universities return and while most people leave Athens due to the heat. It isn’t surprising at all.

The ND government, in the run up to the elections, promised closed camps for refugees. Independent organisations are poised, waiting for families to be released. This may not happen. They may end up in concentration camps, miles from anywhere, left to rot.