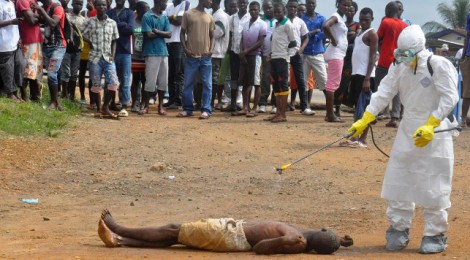 The Ebola catastrophe that threatens to be the next deadly pandemic is entirely unleashed by capitalism and will be a holocaust against the poor.

It is a product of environmental destruction, overcrowding, hunger and the absence of public health infrastructure – exacerbated by years of war.

The virus is not new and has been extensively studied for nearly 40 years, not least because it’s first appearance in 1976 in Southern Sudan and then in Congo (from whose Ebola river it gets it’s name) was suspected of being a Cold War biological plot by the respective rival super powers.

It is one of a range of Haemorrhagic Fever viruses to have dwelt harmlessly in their hosts in deep forest interiors that have crossed the species barrier as environmental exploitation for logging and minerals brings them into closer contact with humans.

Previous outbreaks of virulent diseases like Ebola or Marburg virus (more familiar as Green Monkey disease) have occurred in small isolated communities and have been ruthlessly quarantined to burn themselves out, often by the affected communities themselves. But war and commercial interest have rapidly increased urban migration and populations living in large shanty towns. Poor in income and food choices, many are dependent on the trade in ‘bush meats’ to eat, increasing contact with host species. In the case of this outbreak, the trade in Fruit Bat meat, a known host of the virus, is seen as the most likely cause.

Now, poverty, combined with overcrowding and poor sanitation have turned what might previously have burned out into a raging firestorm – with very few people to fight the fire. Liberia had just 100 medical doctors at the beginning of the outbreak and the medical charity Medicins Sans Frontieres (MSF) has borne the brunt, with the help of local largely unqualified volunteers. This has been the case in Guinea and Sierra Leone too.

It is the scale of this challenge versus the paucity of resources that has led to the abandonment of well established protocols for responding to an outbreak. And it has come as no surprise. In May, MSF made clear they were overwhelmed and that neither they nor the governments of the affected countries could contain or treat the epidemics. They had indicated in March that this point would soon be reached.

Seven months later we prepare for its imminent arrival in the world outside Africa, shutting the stable door after the horse has bolted.

The World Health Organisation and United Nations appear to have woken up – but they are not benign third parties, they are effectively the international organs of the wealthy major powers. While promises and preparations begin for an effective response, infection rates are rising exponentially, doubling every 3 weeks. Numbers in West Africa, as more countries in the region report cases ( notably Nigeria, Africa’s largest economy), are expected to rise from the current 10,000 to nearly 1,500,000 early next year.
Care currently, where it’s provided, is palliative – there is no available treatment or vaccine. If people survive long enough through feeding and hydration, their immune systems begin to fight back and may beat the virus. 50% will survive. Where this care isn’t available, mortality soars to 70-80%. The maths is not rocket science.

Comparisons of scale and proportionality are erroneously being draw with other major global killers like Malaria and HIV, but these are diversions that don’t stand up to scrutiny.

Malaria kills nearly a million people a year with perhaps 200 ,000,000 cases. On the face of it, Ebola seems negligible. But malaria is a known quantity and people with malaria do not go on to infect twice their number every 3 weeks.
HIV began as a cross species infection, probably in the 1950’s. Its asymptomatic phase is around 10 years and while it can be specifically transmitted, it is not infectious passing through ordinary human contact.

There is however one striking parallel – those who these diseases kill are overwhelming the worlds poorest people, and as with Ebola, the rich world belatedly responded when its own interests of commerce and profit where threatened.

Poor people, black people, cheap labour, capitalism’s ‘variable capital’ is seen as expendable. But now the developed world’s trade, profit and security interests are directly affected, and capitalism belatedly responds. Its self interest is always short term and this greedy self interest now confronts us with a potential crisis of unimaginable proportions.

Africa is portrayed as a continent in perpetual crisis – those portraying it as such seldom own up to being the cause. As the state managers of capital prepare to pull up the drawbridge and impose their own forms of self interested quarantine, millions in Africa will be left to die.

Governments are already using this, as with the other monsters they have created (the war on terror, recession and debt) to cow and intimidate us into compliance and submission – if we let them!

Even when this slaughter has been stopped or burned out, the ruthless exploitation of the planet and its people for profit has more doors to catastrophe to open to enrich the few at the expense of the rest of us. Our struggle against it is literally a mater of life or death. Its eradication or ours.