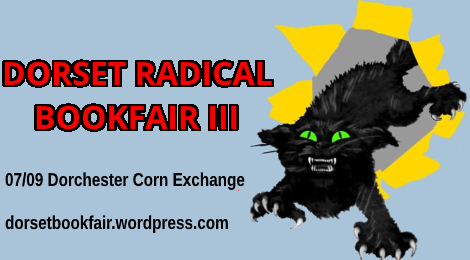 Bristol AFed rarely miss a chance to get down to support our friends in Dorset, and this year’s Dorset Radical Bookfair was a great opportunity to do so again. It’s Dorset’s third bookfair, and took place at a fantastic and friendly venue, the Corn Exchange, in central Dorchester. But before going any further, it’s probably worth asking ‘why a bookfair’?

Anarchist (and radical) bookfairs have been a staple of the anarchist movement since the 1980s in Europe and beyond, and serve various roles. First and foremost, they are one of the most coherent public faces of anarchism, giving us the opportunity to counter the negative stereotypes and misconceptions around anarchism, in a (mostly) welcoming setting. Secondly, they also give us a chance to raise much-needed funds for various projects. Thirdly, we use the bookfairs as a chance to go over and advance our theories. And last but not least, they’re a great opportunity to create or re-kindle personal connections, which bind the movements together. We sometimes call them ‘Anarchist X-mas’ (and yeah, they also can entail the odd row, just like actual X-mas!).

This was one of many book fairs that have made a clear statement against tolerating transphobic literature or behaviours (much like the new London Anarchist Bookfair crew). Always good to see folks siding with the oppressed and avoiding any fence sitting! The event was a success and went off peacefully enough, aside from the odd troll going from stall to stall and picking arguments over whatever they could manage. As well as ourselves, there was a variety of campaign groups present, from the likes of Exeter Anarchist Party, Black Skin Black Flag, Berkshire Antifascists, Bristol Radical History Group (who have their own Radical History Festival in Bristol next month, on Saturday 12th), Dorset Parents Campaign Group for SEND Children, IWW Dorset, Freedom Press, Prisonism, Radical Routes, Wessex Solidarity, and Weymouth Animal Rights.

We hosted a talk called ‘Strengthening Global Links: on International Anarchism’, which reported on the various lessons learned and shared during this summer’s IFA/IAF (International of Anarchist Federations) Congress in Ljubljana. The discussion also explored ways to expand upon these global strategies of co-operation, and how to make links with regions and groups outside of our current networks – as ever, one hour is rarely enough time to get into these things, but we made a good start! There were of course lots of other talks and workshops. They included; a climate crisis panel on environmentalist strategy and tactics, the obscure details of land ownership in the UK, egalitarian approaches to news distribution, wildcat strikes in the Royal Mail, Chav Solidarity, putting radicalism back into the LGBTQ+ movement, surviving prison, and the Romantic writers’ relationship with the natural world.

The daytime stalls eventually segued into the evening and the after-party; another fine part of the bookfair tradition. This one was mostly too deafeningly loud for our poor ears, heavily featuring one flavour or another of punk or hardcore, with the Sporadics, Blunders, Broken Dregs, and Jonny L. The more nuanced and sing-alongy anarcho-folk of Ash Ludd and Dan Kemp were more our cup of tea. But still: five different acts for five quid – you can’t say fairer than that, and the tinnitus eventually fades.

Other highlights of the day, other than the various stall conversations on “Why does that sticker say ‘Fuck Work’?” and the finer points of anarchist communism, was the open mic impromptu performances on the day-long Busk Stop (including a great poem from an anarchist sex worker), and the food. The cake. As you might be aware, anarchism in the British Isles runs on vegan cake, and there was more tasty chocolate cake this year than you can shake a… a hand at.

All in all, this bookfair wasn’t overflowing with punters (still busier than the high street, though), but there was definitely a good atmosphere. Of course, it would have been better still if we’d been able to also get ourselves to Bradford Anarchist Bookfair, that days DSEI anti-arms fair protests, and the anti-fascist counter-demo in London as well. Bristol AFed did manage to have a couple of members over in Bridgewater spreading anarchism amongst the city’s vegans at a local fair on the same day. Being in two places at once was pretty good, even if we didn’t manage being in five!