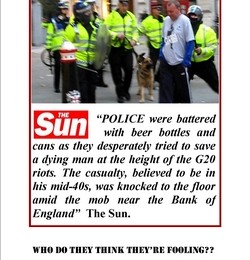 Coverage of G20 Meltdown in London and aftermath, legal info and witness appeals 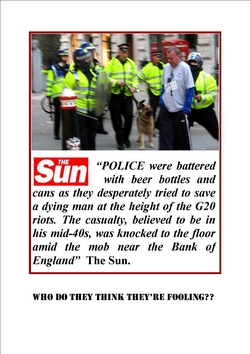 Last Hours: G20: another version of the truth – timeline leading up to Ian Tomlinson’s fatal beating by unmarked balaclava cop, including Met (Metropolitan Police), BTP (British Transport Police), FIT (Forward Intelligence Team) and dog handler activities. As usual, the killer cop was not on his own and others were subjected to injury (including dog bites).

London Indymedia: Response to Police raids on Rampart social centre and the G20 Meltdown Convergence Centre. Read longer article on libcom.org. See also video of Police Pointing a 50,000-volt Taser at a Group of People Lying on the Floor.

Video (via Guardian) of masked cop with shoulder ID missing, who baton-whipped then shoved to the ground Ian Tomlinson, the man who died, from behind while he was just walking ahead of cops with hands in pockets.

Channel 4 News releases tape recovered from damaged camera clearly showing cop hitting out at Ian Tomlinson from behind with baton.

Further video (via Guardian) showing Ian Tomlinson hitting head on ground after police assault and also showing him just standing on the pavement just minding his own business prior to the police advance.

Earlier photos (via Guardian) of Ian Tomlinson getting hassled by cops.

Video (via BBC) of police attacking the women who was hit across the face and whipped with a baton, by a cop with his uniform lapel ID number concealed. 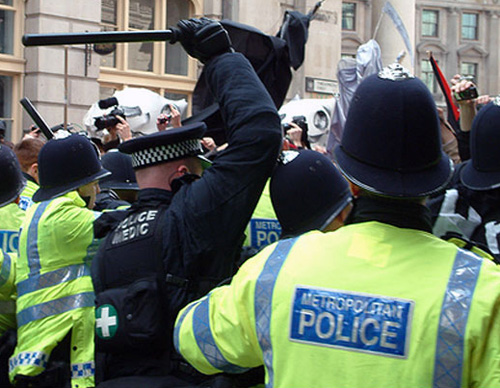