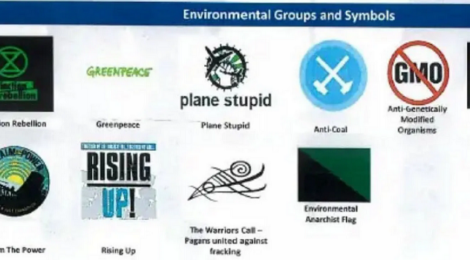 Recently, you may have noticed that ‘Counter Terrorism Policing’ decided that the AF is enough of a threat to include our logo in their guide, now withdrawn, which aimed to advise teachers and medical staff about potential extremists. Joining us in the guide were other anarchist-linked groups, such as Class War and Solidarity Federation but also groups that have a reputation for being a lot more tame in their political outlook such as Greenpeace, Extinction Rebellion (XR) and Stand Up to Racism. Clearly, the term terrorism would not be applied to these groups and their actions in most people’s minds. In response to the widespread backlash to their targeting of environmental groups, the police pointed to a note in the guide that said, “not all of the signs and symbols noted within this document are of counter-terrorism interest.” However, that note was placed only within the section of the guide about far-right and white groups, relating to their use of pagan symbolism, which is ironic since right-wing groups and individuals were judged by the Met in 2019 to be the fastest growing terrorist threat in the UK!

Conflating organisations that are prepared to use direct action to counter oppression or protect the environment with terrorists and fascists is insulting to those of us who are seeking to create a socially peaceful and non-violent world, but only acts to show the lengths to which governments will go in order to suppress any challenge to the status quo. Treating fascists, who endorse bigotry and genocide, as equivalent to anti-fascists, who strive to prevent bigotry and genocide, is an example of the disingenuous application of the ‘Horseshoe theory’ – the idea that there is a continuum of political viewpoints away from the a centre which goes off left and right in opposite directions but tends to meet up at the extremes.

We join the many voices who have condemned this guide and the almost Orwellian intentions behind it. Unfortunately though, by focussing on non-violence, this condemnation has for the most part accepted the narrative put forward by the State. By such a limited condemnation, nation states are allowed to assert and maintain their ‘legitimate’ monopoly on violence. Not an eye has been batted towards the constant violence and terrorism that the British government, and other governments across the planet, have employed historically, and continue to employ.

If violence is “the use of physical force so as to injure, abuse, damage, or destroy.”, then the thousands of cases of abuse, injuring and killing countless people by the Police clearly betray their role as a ‘violent’ institution; if terrorism is the “use or threat of action” that “is made for the purpose of advancing a political, religious or ideological cause” or “involves serious violence against a person”, then by its own definitions, the British state’s imperialistic involvement in Western Asia, for example, during which it has organised coups, dealt arms, dropped bombs and massacred civilians, all in the pursuit of its neo-colonial and neoliberal cause, has, alongside many, many other acts, established it as a terrorist operation for a long time. In addition to these more obvious acts of violence, nation states are responsible for violence in everyday life through economic inequalities and the upholding of gender oppressions or racist policies (current or historical) which result in physical and mental illness, injury and death.

Non-violence can be a great method to employ, but we must be mindful of the privilege that allows us to employ it, and acknowledge the fact that such privilege is neither universal nor necessarily permanent. Violence has been necessary for people to collectively free themselves from state oppression, or to attempt to do so, whilst terrorism must be opposed as an authoritarian, cruel, elitist method which deliberately seeks to create confusion and always undermines class solidarity.

Recent struggles by workers and students in places such as Hong Kong, Chile, France and Iran demonstrate not only the necessity of collective direct action, but also its benefits and efficacy. In this context non-violence can be an act of complicity with oppressors, allowing nation states to continue or escalate their own violent actions at the expense of ourselves or others. We can note that states typically include damage to property in their definitions of unacceptable actions by citizens. Very rarely, different parts of the state can disagree on this, such as the case in UK where a group of women who, in 1996, smashed up British made Hawk war planes bound for the Indonesia (East Timor) were acquitted by the courts on the moral grounds of preventing genocide. Other times they are prepared to respond to people’s willingness to take direct action with extreme force, such as the sinking of a Greenpeace boat, the Rainbow Warrior, by French secret service divers mining it in 1985. Another boat-related example was the all-out assault by Israeli military forces on the humanitarian Gaza Freedom Flotilla in 2010. The UK state regularly gets away with outrageous violence on protesters – in December 2019 one cop escaped discipline after the beating of a student in the head with a baton during a kettling in the 2010 student fees demo, which caused him brain damage, when it was argued that video footage showed another unidentified cop had done it!

If and when states become more and more authoritarian in response to the climate emergency or unchanging economic precarity, the dichotomy between violent and non-violent action will become more useless than it already is. Already the British government chose to push back on the idea that XR should be allowed to use direct action even while it adheres to a non-violent ideology. Renouncers of a more pure non-violence at present may well need to change to more diverse tactics if their ability to perform direct action is not to be hindered by state repression. Unlike terrorism, collective action can be built upon and must adapt to changing situations, fanning the flames of revolution, which these states try so desperately to extinguish.

Instead of demanding ‘non-violence’ then, we should stand, together, in solidarity with all those who fight to end their oppression, and the oppression of others. The increasingly authoritarian measures being introduced by the police can and must be opposed, but any opposition that accepts the narrative that the State has set forward about what form of protest is acceptable is extremely vulnerable to failure. Together, we can fight to achieve our ambitions, but we must not blindly betray each other, and ourselves, by ‘self-policing’ our activities; instead, we should celebrate a diversity of tactics and use it to its fullest capacity to end our oppression once and for all!