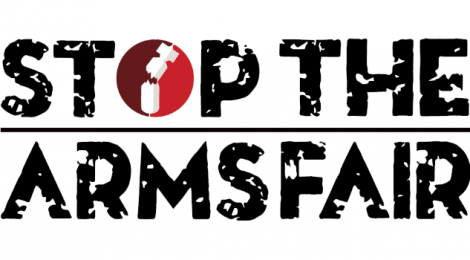 Chase the Arms Dealers – Join us on March 28th

The DPRTE arms fair pulls together the UK military, weapon manufacturers, and arms dealers and exporters. Not only does it support our own military industrial complex, but it involves companies like BAE systems who supply some of the worlds most repressive regimes, such as Saudi Arabia and Turkey.

On March 28th, we’ll be joining with a host of other people, from members of faith groups to trade unionists, to confront those who profit from death and abuse. If you want to take a stand, scroll down for the practical info, if you’d like to know more first, read on for our DPRTE FAQ!

What is DPRTE?
DPRTE, stands for Defence Procurement, Research, Technology & Exportability. I know, catchy right? It brings together multinational arms companies, smaller companies involved in research or production, and organisations that want to buy or help export weapons. It first took place in 2012, and has happened almost every year since. The organisers often like to claim ‘it isn’t technically an arms fair!’ as contracts aren’t signed at the event itself. No one really buys that though, even the police just call it an arms fair!

Every bomb that is dropped, every bullet that is fired, has to be made somewhere. Wherever that is, it can be resisted.

Why oppose it?
The UK arms trade exists for two reasons. To make a bunch of already rich people richer, and to allow our government to act tough in front of their international rivals. The cost of this is immense. Perpetual war, something any rational person would want to avoid, is quietly pushed for in order to drive up stock prices. The fires of conflict are kept burning with the supply of British made weapons, regardless of the human cost. Brutal regimes are kept in power by British missiles and aircraft. Business as usual for the arms trade can be disrupted, if its profiteers are exposed and it’s political supporters challenged.

What about the economic benefits?
Whenever the UK’s role in the international arms trade is brought up, there is talk about the ‘job creation’. For most of us the human cost of these jobs is simply too high, even those whose lively hood depend on them have in the past fought against the arming of authoritarian regimes! Even if you only cared about income, once you factor in tax payer funded subsidies, the government research handed over, and the free assistance and promotion given by the civil service we pay more than £18,000 a year for every single one of those jobs. Any sector would be successful with that backing, and the support could be given to anything from education to environmental protection.

A History of Resistance to DPRTE – In Which They Run Away A Lot
In 2013 students at the University of the West of England (UWE) discovered an ‘exhibition’ being hosted on their Frenchay campus was in fact an arms fair. Anarchist Federation members studying at UWE were amongst those who disrupted the set up, marched through campus, blockaded the gates, and got inside the event itself. The day was a shambles, with most of the arms dealers stuck in traffic. At this point DPRTE ran away to Cardiff.

A further four DPRTE events took place at Cardiff’s Motorpoint arena. From the start they encountered resistance, organised by Stop the Cardiff Arms Fair, South Wales Anarchists, The Anarchist Action Network, Campaign Against the Arms Trade and more! Cardiff’s DPRTE events saw an occupied roof, red paint on their expensive suits, marches, communications blockades and increasing numbers of protesters surrounding the venue for the entire day. The police attempted to intimidate and arrest protesters at random, but this just led to dropped charges, payouts for wrongful arrest, and an even more determined resistance. By 2018 the protest had grown much larger, aided by groups such as the Kurdish Solidarity Network, and members of AFed from as far away as Cornwall. The arms fair was even being condemned in the Welsh Assembly. At this point DPRTE ran away to Birmingham.

Putting some distance extra between DPRTE and the committed anti-arms activists of South Wales and Bristol probably seemed like a good idea to the organisers. However a coalition of people in Birmingham soon made it clear that there would be just as much trouble for the event near their city. By the start of 2019 pressure was mounting on the venue and local government, and packed out meetings representing unions, faith groups, anarchists and others were putting plans in place for a number of demonstrations. At this point DPRTE ran away to Farnborough.

Changing venue with little time to spare couldn’t have been an easy (or cheap) decision for the DPRTE organisers. In Farnborough perhaps they think they have made themselves ‘un protestable’, with a secure venue owned by the industry itself, nestled in between an air field and the premises of arms companies. The creative, resourceful and committed movement against them begs to differ. Do they have anywhere left to run?

What you need to know!
The loose coalition of groups that has formed to confront DPRTE, is planning a static protest near the entrances of the event. There will be a diverse mix of folks present, and at these events it is common for small groups to launch their own actions throughout proceedings. Keep an eye out if you want to support these, or of course plan your own.

The Arms Fair takes places for one day, Thursday the 28th of March. Most of the set up is completed the night before, so delegates begin to arrive before 9am. This makes early morning the key time for any protest that wants to make its presence known, and we’ll be kicking things off from 8.30am.

The venue itself – Farnborough International Exhibition & Conference Centre – has multiple entrances, and prior experience tells us that if there is a protest at one, organisers may attempt to hide this from attendees by instructing them to enter by a different entrance. As such the location of the main bulk of the protest may vary, so make sure to check back here just before the day, or keep in touch with Campaign Against the Arms Trade or Birmingham Stop the Arms Fair. For now, aim to get to Queens Roundabout, Farnborough GU14 6AZ.

There are groups travelling to Farnborough from Bristol and Birmingham. If you would like to join them contact Bristol Anarchist Federation or Birmingham Stop the Arms Fair. There are several train stations near the venue, (Farnborough Main, Farnborough North, Aldershot) with regular services from London Waterloo, Guilford and Reading. If you are coming by car, you’ll need the A325 which is off the M3 and A31. More travel details can be found on the venues website, or by studying your online map of choice!

Unfortunately we can’t control what the police do. Whilst it is completely legal to take part in a static protest, the police will possibly see fit to give you trouble anyway. This is a risk at any and all public protest, and we highly recommend you read up on your legal rights, make sure you stick with a group of fellow protesters, and keep a look out for each other.

We’ll finish off by letting you know what you should bring. Beyond the basics for any day outside (an extra layer of clothing, water, snacks), we want to be seen and heard. So bring placards, banners, megaphones, loud voices, or quiet plans!

Bristol Anarchist Federation are hosting an anti arms fair discussion and planning session on Sunday the 3rd of March.

Campaign Against the Arms Trade are hosting two days of workshops building up towards actions against DPRTE’s bigger brother DSEI,. they take place on Saturday and Sunday the 9th and 10th of March in London.