Browse: Home   /   Boycott your graduation ceremony if you really care about the class divide 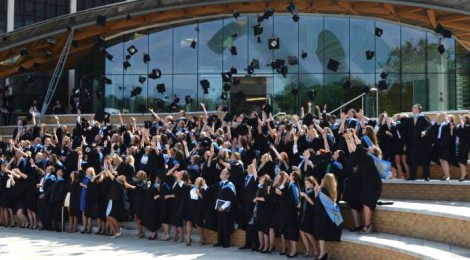 The following piece has been submitted to us from Rachel E. Brown, and while not a member we are posting this piece in order to open up a discussion on the matters raised. To that end one of our members has added their reply underneath (with Rachel’s blessing).

Boycott your graduation ceremony if you really care about class divide

This summer, thousands of students will attend their graduation ceremony which traditionally marks the completion of an undergraduate degree at university. But this ceremony is not just some innocent celebration of achievement. Finalists seem to regard it a “must do” event, something you can’t afford not to do. But with gown hire around £40, Champagne costs and eye-watering professional photography charges, many students can’t afford it, literally. Student journalists have long complained these costs could mean students “miss out on such an important day”. Yet all this grumbling about prohibitive costs for an essentially self-congratulatory event is hardly compelling in a society facing £12bn in welfare cuts and more Foodbanks than ever.

That doesn’t mean the grievances of less advantaged graduates should be disregarded. The sacrifices made to attend the graduation ceremony – despite the costs – indicates the importance of the occasion. But why is it “such an important day” to them? Students and parents tell themselves it’s about the acknowledgment of three years’ hard work. Yet students aren’t the only ones to work hard. The worker collecting dustbins in all weathers on minimum wage doesn’t get an audience applaud or to wear the prestigious black robe and cap after three years’ labour. We seem to let this differential treatment go unnoticed even though we would notice the loss of refuse workers far sooner than fewer graduates! The graduation ceremony is not simply about achievement. It tells the world your educated work is worthy of a special occasion. But there is no ceremony for the refuse worker. What is presented as acknowledging achievement is actually a ceremony dividing the worthy educated from the unworthy – that’s the real reason why students are so keen to attend. It’s a rite of passage into worthiness.

The real importance and, the real problem of the graduation ceremony is how it reinforces the class divide. Graduates and parents want it so badly, not as an acknowledgement of achievement, but because attendance is about admittance. For parents, their dear child graduate crowns the family mantel of social mobility – along with shopping at Sainsbury’s and having a second car. For the established middle-class, it merely cements their social position. The graduation ceremony is a secular Confirmation ritual for the established middle-class and a symbolic rite of passage for the aspirational.

The effects of the problem were shown recently on my campus, the University of Exeter. Organise Exeter (facebook) – a new activist group responding to the disappointing general election – held their first meeting in the grandly named, University “Alumni Auditorium”. Attended by students and locals, the meeting marked a juncture between town and gown. During the discussion, a local made a striking request. She asked for future meetings not to be held at the University because “she had never been to university herself” and found just the act of walking onto campus intimidating. Her experience should compel us to identify what makes the university an intimidating place for those without a degree and to do something about it. If we continue to associate education with class, prestige and worthiness, we will simply reproduce education as an instrument of class divide.

A meaningful step is to resist the signifiers of prestige associated with university education. The most flagrant display of prestige is found at the graduation ceremony. Prestige symbolism in drinking Champagne, wearing black gowns and the general formality of the occasion – what we know as “pomp and circumstance” – all contribute to the problem. It’s no coincidence that similar robes are donned by lawyers and judges who are probably the longest standing prestigious power-holders in the country.

For the working class like myself, there’s a further reason not to attend. In my four years at university, I have seen the campus population diversify beyond the private school “Exetah” (as they are known here) crowd. But there is a difference between inclusion and assimilation. It’s not genuine inclusion if we less privileged merely assimilate to ceremonies designed by and for the elite, to the exclusion of the workers. Inclusion means changing things so you accommodate rather than culturally transform and homogenise the once marginalised. If we simply assimilate to the practices of the elite, we only become one of them. We become part of the problem.

Social equality demands us to release education from these class ties. Education is not working when – rather than emancipation – it’s an instrument of intimidation and division. We cannot have the upward mobility of the educated few at the expense of all those who did not go to university. I’m seizing my chance to resist the prestigious rituals of the elite that continue to make groups in our society feel unworthy or intimidated by “the educated”. I’m boycotting my graduation ceremony. It’s an individual act of solidarity with the refuse worker, the intimidated local activist and the cause for the inclusion, not assimilation, of the marginalised. Ceremonies are made for the worthy, don’t pretend you are more worthy or work harder than others. Boycott, refuse to wear the robe – whatever you do, resist this elitist ritual. If you’re an egalitarian, you will join me in this statement against education as worthiness, prestige and ultimately, class divide.

A reply from a member of the Anarchist Federation

This piece is certainly thought-provoking, acknowledging the education system as reinforcing the existing stratification of society into class lines. While it is admirable that certain overt aspects of this division are rejected, it has to be accepted that power does not renounce itself – for which it is necessary to make explicit the form of class rule which we experience. That is, one in which the course of our lives are largely determined by those with the power to hire, fire, evict and convict, powers primarily exercised over those without such powers. The group without these powers are often referred to as the “working class” (regardless of whether they are receiving unemployment benefits, studying, retired, hospitalised, or finding other means of supporting themselves). We can also expect that financial capitalists, those with large investments, though no direct means to hire or fire, will ally themselves with the industrial capitalists. A boycott of graduation ceremonies does not substitute a positive program of working class organisation or self-education, nor do working class organisations seem to have clamoured for it. Only the beneficiaries of a tertiary education can boycott their graduation. Of course, while agitating for such a boycott and referring to the nature of class society, valuable contacts can be made.

It is worthwhile to consider the form of education we would like to see in a free society of equals (as lavishly described by Kropotkin in “Fields, Factories and Workshops” for instance, involving joint discovery to a greater degree than pedagogy) and consider the obstacles we face in approaching such a society. Among the impediments are the inaffordability of journals and software, which there are current campaigns to ameliorate, such as with the Open Access movement and the Free Software Foundation. Likewise, there are platforms such as Khan Academy which make tutorials for subjects available for free (though this has notable criticisms, such as the requirement to associate an online account in order to access the content, increasing the capacity for surveillance). Inspiration can be drawn from examples such as Perelman’s “Physics can be Fun”, Hogben’s “Mathematics for the Million” and Voline’s engagement in Prolecult – each was an attempt to anticipate the future society and diffuse the privileges endowed by education.

Ultimately, a social revolution will be required to alter the mode of production in order to achieve an emancipatory education, however we should not ignore the role of education in achieving this revolution. Our ends will be reflected in the means we use here and now. It is for this reason that the symbolic actions (as discussed above) need to go hand-in-hand with solidarity through collective direct action. Students may be able to act in ways that would be too risky to other staff, such as bolstering picket lines or helping confront the bosses. It is these manifestations of solidarity and mutual aid, taking place through participation in shared struggles, that will meet the task of destroying the class divide.